(Review-YA) The Absolutely True Diary of a Part-Time Indian

The Absolutely True Diary of a Part-Time Indian 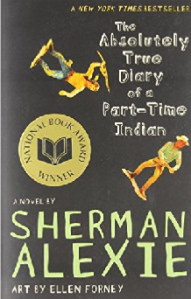 There once was a kid named Junior. He already had a hard time fitting in on the Indian Reservation because of his various medical conditions. And then he decided to go to school off of the reservation (GASP!). Which made everyone there hate him (traitor! traitor!). and then he got to his new school and didn’t fit in there either. At first.

What’s a boy to do? Junior tells his story through humor, both written and visual, through his cartoons and diary entries.

My Thoughts: Junior documents his circumstances with such humor and honesty that you can’t help but love, sympathize with, and root for for him. This is a realistic under-dog story that gives us a somewhat rare glimpse into the lifestyles, culture, and difficulties faced by American Indians living on Reservations in the U.S. The story touches on some dark and upsetting concepts, but I’d recommend this read for anyone. Those younger than 12 may not understand or be prepared for some of the topics and situations.

About the Author: Sherman Alexie is a poet, novelist, short story writer, and performer.