Under Different Stars by Amy Bartol 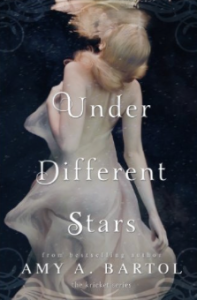 Synopsis:
Kricket has only ever wanted a home, but living in the abusive foster care system has prevented that. Although Kricket has always known there was something different about her, she’s managed to stay invisible and unremarkable … until now. Now two groups of ‘not quite humans’ are hunting her, and when one catches her, they whisk her away to another world. In this world Kricket is not invisible or unremarkable. In fact, everyone wants to use her and her powers for their own purposes. But if Kricket can navigate this new world, and its treacherous political waters, the soldier she’s fallen in love with, and a home of her own, might be within reach.

My Thoughts: This one seems to be swimming somewhat under the radar, but I’m so glad I read it! The start is a little tricky because we (along with Kricket) are swept into an unknown world with strange language and customs without having it explained to us first. But then part of the fun is how slowly the rules of this world are revealed to us and the main character. There are a couple of bumps along the way, with a bit of jumpiness or disconnect happening, but overall the story is funny, exciting, intriguing, and enjoyable. I found myself liking it more the more I read, and by the end I absolutely had to know what happened next. I read book two, and the world and characters get even better. There is all kinds of action, humor, and sizzling chemistry between the characters. One of the greatest strengths is that the main character, Kricket, is actually very well developed and she is believable. She’s tough because of the difficult life she’s led, growing up in foster care. She’s also genuinely intelligent, and it’s nice to not be dealing with a heroine who is helpless. Kricket is brave and clever, funny and resourceful, with a nice mixture of innocence and cunning. The male main character actually shows more naiveté, and that’s an interesting change from the normal dynamic we usually see in these types of stories. It’s as fun getting to know this world as it is these characters. I would recommend this to young adults and adults who enjoy fantasy/sci-fi that takes you from our world into another.

Liked it? Loved it? Gotta have more of it?
The next book in the The Kricket Series is A Sea of Stars

About the Author: Amy Bartol is the author of The Premonition Series and The Kricket Series

There was an error retrieving images from Instagram. An attempt will be remade in a few minutes.