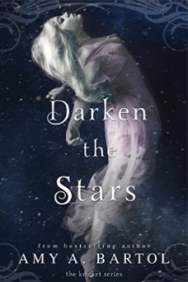 Kricket is the sacrifice everyone else is willing to make. And she’s never been so alone.

Torn away from all she knows once again, and betrayed by those who should love and protect her, Kricket is still willing to make sacrifices for other’s lives and happiness. To a point. This time she’s been sacrificed to Kyon, and Alameeda, who crave her for her powers. Forced to live in Alameeda with Kyon, Kricket learns more about her new world than she’d ever dreamed possible. As her powers in foresight grow, she is frequently able to ‘escape’ and keep tabs on what her friends and former lover are up to. She sees them pulled into the rebellion that sacrificed her, and she learns of how terribly she’s been betrayed her whole life. During her imprisonment she also grows to see that Kyon is so much more than she had thought. He’s better than she thought…. And worse. Kyon is a monster whose own secrets and pain runs deep. And even though he is a monster, she senses a kindred spirit. Because Kricket has darkness inside her too. Everywhere she turns Kricket finds those who want to kill her, or cage her, and her heart has only ever yearned for freedom to fly her own course. As the war mounts, and enemies collide, Kricket will make her final gambit to sieze the life she’s always dreamed of.

Let me first just warn you that Darken the Stars is indeed the final installment of the The Kricket Series. I did not know this before reading it and so wasn’t able to properly prepare myself for the series to conclude. As far as the writing goes, this was the strongest and most focused of the three books in the trilogy. One of this series’ greatest strengths is its intricate and in-depth detailing of the world and all of the advanced technology the world has. Amy Bartol meticulously paints Ethar and its inhabitants so that the reader feels she is walking the very streets of Alameeda, alongside Kricket. Another great strength is Kricket herself. Kricket is one of my favorite characters to read because she doesn’t quite fit the typical YA heroine mold we are seeing so often in books right now. Kricket is tough, intelligent, flawed, tenacious, and likable. She is also funny and adaptable, a real survivor. She goes through so many conflicts, betrayals, and upheavals throughout the series, while never loosing her way or her light. She is a heroine we can root for. Although her experiences change her in some ways because she is inherently adapatable, she never loses the core spirit that made us like her in Under Different Stars. The first half of Darken the Stars took off in a quite unexpected start, but by the halfway point I could see why it had to happen that way. The second half of the story was full of constant hairpin turns, unexpected choices, and great characters. Darken the Stars brings The Kricket Series to a thrilling, heartwrenching, and shocking (but ultimately satisfying and honest) conclusion. It pulls no punches, yet leaves us with beautiful hope.

This series starts out with a young adult vibe in Under Different Stars, but takes a turn into a more adult, or new adult, direction starting with Sea of Stars. Therefore I’d recommend this series for adults or mature teens.

Liked it? Loved it? Gotta have more of it?

The first two books in the The Kricket Series are Under Different Stars (book 1), and A Sea of Stars (book 2).

About the Author: Amy Bartol is the author of The Premonition Series and The Kricket Series