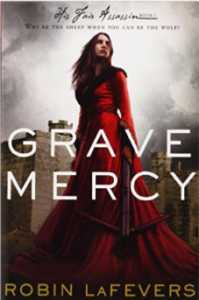 Synopsis:
Ismae escapes a brutal arranged marriage and is shepherded to the convent of St. Mortain, the saint (or god) of Death. Here she learns that she is a “daughter of Mortain” and has gifts that make her fated to be an assassin, to deliver Death’s will on earth. After training at the convent, Ismae is finally given her first real assignment, something she has been eager for, for some time. Ismae is sent to court with the instructions to get close to, and kill, a man who the convent believes is a traitor to the Duchess. But, once away from the convent, Ismae doesn’t see treachery from this man, only loyalty and honor, and a driving desire to keep the Duchess safe, himself. Ismae finds herself in jeopardy of giving this man her heart, and betraying everything she’s worked for or believed in by disobeying the convent, and Death himself.

My Thoughts:
I was recommended to this book, and I later found it for free on Kindle Unlimited, so I figured I’d give it a try. I am so glad I did, because I adored it, and quickly read the next two books in the trilogy as well. This is one part historical fiction, one part fantasy, with a couple drops of romance. Set in a fictional representation of historical Brittany (France), the setting of these books is a bit different than the more traditional English or Paris courts, making a nice change. One of the things I liked best was that the author calls the main characters Assassins, and doesn’t shy away from actually having them assassinate people. A lot of the time we have these supposedly killer female main characters, but then during the course of the books they never kill anyone, unless its in self-defense. Well these books are different because these young women really do assonate people, and they are even eager to do so. It’s not that the main character is blood thirsty, but she believes that this is her calling, bestowed upon her by Saint Mortain, the god of Death, himself. The other thing I enjoyed is the world building of both life at the convent, and life at the court of the very young Duchess of Brittany. Both are given attention, making the side characters in both places quite well developed and fully realized. Threads of the stories of Ismae’s two friends are also interwoven subtly into this book, making sure that the reader looks forward to the books to follow. Another aspect I enjoyed is that although this is the first book in a trilogy, it is also a stand alone book. Ismae’s story is basically completely wrapped up in this book, and her friend Sybil’s story starts in the second book. I enjoy when the books of a series take place in the same world, but with a new character. This way they act as a series, but also its own self-contained standalone story.

Liked it? Loved it? Gotta have more of it?
The next two books in the His Fair Assassin series are Dark Triumph and Mortal Heart

The Kiss of Deception (Remnant Series) by Mary Pearson
Throne of Glass by Sarah J. Maas